To share your memory on the wall of Robert Louis, sign in using one of the following options:

Provide comfort for the family of Robert Louis with a meaningful gesture of sympathy.

Print
Robert Andre Louis, 64, of Pittsfield, died Sunday, August 11, 2019, at his home after a long illness, surrounded by his friends and family.

Born in Pittsfield on August 1, 1955, the son of Andre and Elizabeth Rheaume Louis, he was a 197... Read More
Robert Andre Louis, 64, of Pittsfield, died Sunday, August 11, 2019, at his home after a long illness, surrounded by his friends and family.

Born in Pittsfield on August 1, 1955, the son of Andre and Elizabeth Rheaume Louis, he was a 1974 graduate of Wahconah Regional High School.

Mr. Louis was a master mechanic by trade. He was the owner of Louis’ Pit Stop, and previously worked for Berkshire Armored Car, Virgilio Construction Company and County Concrete Corporation.

Bob was an avid New England Patriots fan, he especially loved going to the games in Foxborough with his daughter Kayla. He enjoyed classic cars, NASCAR and wrestling. He also modified stock cars and raced them at Lebanon Valley.

A special Thank You to HospiceCare In The Berkshires, as well as his PCA’s for their kindness and compassion.

FUNERAL NOTICE: Funeral services for Robert Andre Louis will be held FRIDAY, August 16, at 11:00am at DERY FUNERAL HOME, 54 Bradford Street, PITTSFIELD with Rev. Peter A. Gregory, Pastor Emeritus of St. Charles Church, officiating. Calling hours will be THURSDAY, August 15, 2019 from 4:00 to 7:00 p.m. In lieu of flowers, memorial contributions may be made to the American Brain Tumor Foundation in care of the funeral home.
Read Less

We encourage you to share your most beloved memories of Robert here, so that the family and other loved ones can always see it. You can upload cherished photographs, or share your favorite stories, and can even comment on those shared by others. 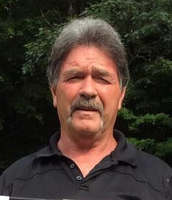