To share your memory on the wall of Ralph Farrar, sign in using one of the following options:

Provide comfort for the family of Ralph Farrar with a meaningful gesture of sympathy.

Print
Ralph Richard Farrar, 98, a resident of the Millhouses of Adams, formerly of Cheshire, died Wednesday, May 22, 2019, at Berkshire Medical Center.

Born in Pittsfield on September 18, 1920, the son of Ralph E. and Eva LeClair Farrar, he wa... Read More
Ralph Richard Farrar, 98, a resident of the Millhouses of Adams, formerly of Cheshire, died Wednesday, May 22, 2019, at Berkshire Medical Center.

Born in Pittsfield on September 18, 1920, the son of Ralph E. and Eva LeClair Farrar, he was educated in Lanesborough schools. He served four years with the Massachusetts Army National Guard.

Mr. Farrar was employed by Crane & Company, Inc. where he was a utility man, retiring in 1979. He had previously worked at the former Elmvale Worsted Mill and General Electric Company.

Mr. Farrar was a member of Morningside Baptist Church and served as a Deacon since 1944. He was also a member of the Adams Senior Center where he proudly volunteered five days a week. On May 23, 2017, at the age of 96, he was the recipient of the 29th annual Silver Cane Award.

Mr. Farrar's wife, the former Bernice May Langenback, predeceased him on May 8, 1984.

He was predeceased by his two sisters and his twin brother.

The family would like to thank his daughter-in-law Dolores and also Jody Goff for their compassionate care.

FUNERAL NOTICE: Funeral services for Ralph R. Farrar will be held Tuesday, May 28, at 11:00 a.m. at DERY-CHESHIRE FUNERAL HOME with Rev. Donna J. Swiers officiating. Burial will follow in Bellevue Cemetery, Adams. Calling hours will be Sunday, May 26, from 2:00-4:00 p.m. at the Funeral Home. In lieu of flowers, memorial contributions may be made to Morningside Baptist Church in care of the Funeral Home, P.O. Box 445, Cheshire.
Read Less

We encourage you to share your most beloved memories of Ralph here, so that the family and other loved ones can always see it. You can upload cherished photographs, or share your favorite stories, and can even comment on those shared by others. 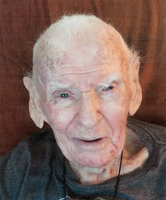