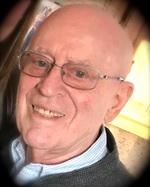 James E. “Jim” Dellea, 96, died peacefully in his Commonwealth Ave. home on June 30, 2019. A lifelong resident of Berkshire County, Jim was devoted to his family, church and community, and was admired by all who knew him for his intelligence, wit, curiosity, selflessness and modesty.

Born in Great Barrington on December 31, 1922 to the late John M. and Mary Barry Dellea, Jim grew up on his family's dairy farm in Alford. He completed eight grades in seven years at the one-room West Alford Elementary School, then attended Searles High School in Great Barrington, graduating in 1939. He enrolled at Massachusetts State College (now UMass, Amherst), where he earned academic honors in Engineering, served as president of Alpha Sigma Phi fraternity, and trained to be a cavalry officer in the wartime ROTC program. Upon graduation in May, 1943, Jim attended Engineer Officer Candidate School in Virginia, and received his commission as a 2nd Lieutenant. He served on active duty for 39 months during and after World War II, including 27 months in the European Theater. He was the commanding officer of an engineer map unit which provided support to the Allied forces following the D-Day invasion, and later served for about one year each in France and occupied Germany. Upon his discharge as a Captain in 1946, Jim returned to the Berkshires, settled in Pittsfield where he served in the active Army Reserve until 1969 and on inactive status until his retirement as a full Colonel in 1982.

In December, 1946, he began his nearly 40 year career at General Electric as a technical writer in the Engineering section of the Power Transformer division. He later transitioned through marketing, sales and customer support positions; for his last decade, Jim was a Sales Manager with responsibility for meeting the custom-built large power transformer needs for utilities across one third of the U.S.
Soon after settling in Pittsfield, Jim met the love of his life, the beautiful Pittsfield native, Rosemary Cronin. They married in October, 1950, and were devoted inseparable companions for nearly 57 years. In their home on Commonwealth Avenue, they were loving parents and role models to five children, friends to neighbors, and parishioners at Sacred Heart Church. When the children were young, Jim's work and Army Reserve duties required frequent travel, yet he somehow managed to re-wire, paint and wallpaper the entire house, read bedtime stories, help with homework, attend school, church, scouting and athletic events, and bring the children to visit their grandmother and uncles on the Alford farm nearly every Sunday. Despite living in the “big city”, Jim was never spiritually far from his rural, pragmatic, New England yankee roots, and the children all inherited his love for the Berkshires and nature in general.

Jim was quietly brilliant. An avid reader and outstanding card player, he would complete several crosswords daily and almost always get most of the correct responses before the “Jeopardy” contestants. A quiet man who typically kept opinions to himself, he nevertheless was insightful when he chose to speak and always loved a good joke, bad pun or subtle sarcasm. His genius was perhaps best exemplified by his almost magical ability to pack 7 humans and a week's worth of luggage into one station wagon and then transport the family safely to Cape Cod, Cincinnati, Montreal or Florida for the annual summer vacation.
As the children grew up, attended college and began families of their own, Jim and Rosemary had more time to devote to square dancing, church and community activities, and travel. They loved spending time with their grandchildren whenever possible, including many lively and memorable games of Uno! and Dominoes, or quieter times piecing together jigsaw puzzles.

Growing up on a farm during the Great Depression, Jim had limited free time to participate in organized sports. He was an avid sports fan, however, cheering on his beloved Red Sox, Celtics and Patriots through all their lean years and reveling in the more recent championship seasons. Above all, he was a good sport—pleased with favorable outcomes but never angry when his teams didn't prevail. He would drive the children to skiing, swimming, track or hockey, and wait patiently until the practice or competition ended, always encouraging and never pressuring or criticizing.

Jim was a member of the Military Officers Association of America, the Knights of Columbus, and the GE Pensioners and Quarter Century Clubs. He served as Chairman of the YMCA Youth Services and Building committees. As an active member of Sacred Heart parish, he served at different times as a member of the Parish Council, usher, lector and CCD teacher. He volunteered at The Mount, the Berkshire Athenaeum book sale, and the Pittsfield Visitors' Center, helped as a timer or lane judge at swim meets, and helped judge academic competitions at Pittsfield High School. Jim and Rosemary played bridge regularly at the Froio Senior Center, a passion which Jim continued until just a few weeks ago. He also took great satisfaction in having visited the Berkshire Medical Center Cardiac Rehab gym nearly 3500 times.

FUNERAL NOTICE: Funeral services for Mr. Dellea will be held, FRIDAY, JULY 12, 2019 with a Liturgy of Christian Burial at 10:00am at Sacred Heart Church, celebrated by Rev. Peter A. Gregory, Pastor Emeritus of St. Charles Church. Burial with Military Honors will follow at St. Joseph Cemetery. Calling hours will be held THURSDAY, JULY 11, 2019 from 4:00pm to 7:00pm at DERY FUNERAL HOME. In lieu of flowers, memorial contributions may be made in his name to Soldier On (a Veteran’s service organization located in Pittsfield), or to HospiceCare in the Berkshires in care of Dery Funeral Home, 54 Bradford St, Pittsfield.