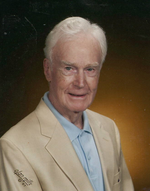 A feisty, red-headed kid from Kalamazoo, Michigan, who became an officer and a gentleman, Edward Allen Van Dyke, Col. USAF Retired, died July 3, 2019 at 98 years old. He was the son of Alice P. and Peter D. Van Dyke.
While stationed at Randolph Field in San Antonio, Texas, Ed had a blind date with Marjorie for dinner and an evening of bingo. They both had reservations about blind dates, but it was magic! They were married 7 months later and have been married for almost 74 years.
Ed and Marjorie have 4 children, each born on a different Air Force base: Edward Jr. (known in the family as Ted), born in South Carolina; Catherine, born in Germany; Michael, born in Virginia; and James, born in Nebraska. The family keeps enlarging with in-laws and outlaws,10 grandchildren,16 great-grandchildren, and 4 great great-grandchildren.
Ed graduated from Kalamazoo High School and attended Kalamazoo College for two years before he applied to become an Army Air Corps Flying Cadet. Having never been up in a plane, Ed was thrilled to find he loved flying. He qualified as an instructor for the Martin B26 in 1942. So began a 30-year career in the military that took him all over the world. He was on Iwo Jima when the first atomic bomb was dropped, on Okinawa when the second bomb was dropped, and in Manila, Philippines, on VJ Day.
During his years in the Air Force, Ed graduated from the Armed Services Command College and had numerous assignments in command of Air Wings and bases in the U.S. (Georgia, Florida, Massachusetts and Maine) and abroad (Germany, France and England). He flew over 5,000 hours in 19 different aircraft, culminating with the six-jet engine B47 and the eight-jet engine B52. He served in Germany during the Berlin Airlift and later as senior Strategic Air Command representative to the commander, Supreme Headquarters Allied Powers Europe in Paris, France. He was cited for his services as the American commander of a Royal Air Force Base at Brize Norton, England for having the best Anglo-American relations of all U.S. Air Force units in the United Kingdom and also commanded a wing of 20 B47s during the Cuban Missile Crisis. He was twice awarded The Legion of Merit for exceptionally meritorious conduct.
Ed earned a Bachelor of Business Administration at the University of Michigan after the end of World War II and was a life-long supporter of the Michigan Wolverines. In preparing for retirement from the military, he earned a Master of Business Administration, at Western New England University in Westfield, MA.

Upon retirement from the military, Ed turned to hospital administration and was hired at St. Luke's Hospital in Pittsfield, MA. Over the years and mergers, he became senior vice president at the Berkshire Medical Center. He had responsibility for the introduction of many innovative programs in radiology, cardiology, oncology and nuclear medicine.
After 16 years at Berkshire Medical Center, Ed retired a second time to act as a management consultant to two hospitals, and Director of Planned Giving at Berkshire Health Systems. During this time, he was a United Way board member and president. He also received the Thomas F. Clooney and Gladys Allen Brigham awards for community volunteerism. Ed has been a member for 41 years at St. Stephen’s Episcopal Church in Pittsfield, also acting as lector and lay Eucharistic minister.
Ed and Marjorie moved to Kimball Farms, in Lenox, MA, 19 years ago. Ed took on the presidency of the Residents’ Association and chair of the Men’s Forum which brought speakers from all over Berkshire County to Kimball Farms. The couple kept up with their traveling while retired, visiting Greece, Malta, Scandinavia, France, Monaco, Vienna, Nova Scotia and Prince Edward Island, to name a few. They also visited many areas in New England with their Gourmet Group and long-term Pittsfield friends.
An active YMCA member for many years, Ed and Marjorie worked out three times a week on the treadmill and weights. He loved golf and was a member of the Country Club of Pittsfield for many years. Downhill skiing was the next best thing to flying for him. He had a season ski pass to Jiminy Peak well into his eighties, although the family was pleased that he didn't use it during the last few years.
He was a force to be reckoned with and made an impact on many lives. We love you and miss you, Ed, Dad, Pops, Father Dear, Grandpa, Sir! Fly high!
Please do not send flowers. Instead, please consider continuing Ed's legacy of service by making a memorial donation to St. Stephen’s Episcopal Church, Berkshire United Way, Berkshire Medical Center or Kalamazoo College.
Funeral arrangements by Dery Funeral Home, Pittsfield. Calling hours will be held on Friday, August 16 from 5-7 p.m. at St. Stephen’s Episcopal Church. A Memorial Service will be held at the church on August 17, 2019 at 11:00 a.m., followed by interment of his ashes in the St. Stephen’s Columbarium.