To share your memory on the wall of David Sweener, sign in using one of the following options:

Provide comfort for the family of David Sweener with a meaningful gesture of sympathy.

An avid history buff and fan especially of Abraham Lincoln, David embodied Lincoln’s sentiment “It is not the yea... Read More
David Paul Sweener, 65, of Pittsfield, MA, passed away October 23, 2019 at Hillcrest Commons, surrounded by his family.

An avid history buff and fan especially of Abraham Lincoln, David embodied Lincoln’s sentiment “It is not the years in your life that count. It is the life in the years” and contrary to all the advice he was given lived his life exactly the way he wanted.

Born in Pittsfield on February 19, 1954, the son of Irving and Barbara (McGovern) Sweener, he was a multi-sport athlete and graduate of Pittsfield High School. As a non-traditional student David graduated with numerous awards from Berkshire Community College in 1992 and went on to attend the University of Massachusetts, but his proudest accomplishments were his children.

Professionally David was a carpenter, mechanic, and jack of all trades. He enjoyed horse racing, transporting contraband across state lines with an old Jack Russell Terrier (Sadie) by his side, bowling, fishing, softball, rooting for the bad guys, and was a fan of the Boston Red Sox and Dallas Cowboys.

FUNERAL NOTICE: Funeral services for Mr. Sweener will be held, MONDAY, October 28, 2019 with a Liturgy of Christian Burial at 9:00am at St. Joseph Church, celebrated by Rev. Msgr. Michael Shershanovich, Pastor. Burial will follow in St. Joseph Cemetery. Calling hours will be held, SUNDAY, October 27, 2019 from 3:00pm to 6:00pm at DERY FUNERAL HOME, 54 Bradford Street, Pittsfield. In lieu of flowers, memorial contributions may be made in his name to the Christian Center or HospiceCare in the Berkshires in care of the funeral home.
Read Less

We encourage you to share your most beloved memories of David here, so that the family and other loved ones can always see it. You can upload cherished photographs, or share your favorite stories, and can even comment on those shared by others. 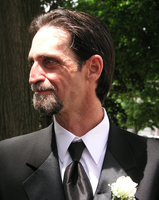